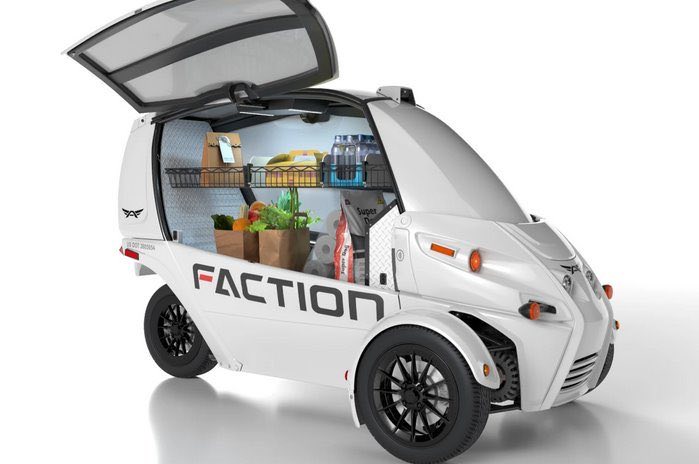 The cargo version, called the “D1,” comes after Arcimoto’s unmanned prototype was unveiled last year and remotely operated by operators, which developers say will be the next step toward a future “ride-on-demand” service.

“Having no driver in the car combines autonomy with the ability to remotely assist you when you need it because the magic is that the vehicle will be able to arrive at its destination without a person in the cab,” said Faction founder and CEO Ayn McKendrick.

Recall that the original (passenger) model Arcimoto FUV is a kind of hybrid of a three-wheeled motorcycle (tricycle) and car, controlled by a motorcycle handlebar and accommodating two people. In the new version, the company’s engineers removed the seats and steering, added side panels and a cargo compartment, and equipped the electric car with autonomous driving technologies, as well as equipment in the form of cameras, radars, and lidars based on DriveLink and TeleAssist platform from Faction.

Unlike solutions from companies such as Nuro and Mobileye/Udelv, the Arcimoto D1 does not aim to completely remove humans from the driving system, as the company mentions a combination of autonomy and remote control, but definitely assumes no human driver on board.

Since the new vehicle will be based on the FUV, the D1 will be capable of a top speed of 120 km/h and will have a range of more than 160 km on a single charge. Arcimoto says it will be able to carry 226.8 kilograms of cargo, but did not share details on how customers will access the goods upon arrival most likely it will be a mobile app or a secret security key.

The cargo bay can be customized to meet the needs of fleet operators, and the manufacturers believe commercial service costs should be less than $2 per mile for delivery operations.

“We were very pleased to work with the Faction team to support unmanned development on the Arcimoto platform,” said Marc Fronmaier of Arcimoto. With a shared mission to deploy super-efficient electric vehicles on a large scale, the commercial launch of the unmanned D1 will be a game-changer in last-mile logistics.”

Faction plans to begin pilot testing this year and is already providing pre-production vehicles to potential customers. Production is expected to begin in 2023.